Enjoy a Kingdom with no limits

We have put together a selection of the most relevant resources for you.

Given that this information may be subject to change and to different interpretations, you are advised to contact the person in charge in order to clarify any doubts and check that the accessibility conditions have not changed.

Visual accessibility at places to visit in Navarre

Valleys and natural areas in Navarre with visual accessibility

General information on nature in Navarre

Visual accessibility of the rail trails in Navarre

If you are into tandem biking, then the rail trails are good places to bike and to explore Navarre on two wheels. These trails are former railway lines from which the tracks and sleepers have been removed. The surface is either asphalted or compacted to make hiking or biking easier. For this reason, and thanks to their low gradients, these trails have a great deal of potential for accessibility in general.

In Navarre there are 5 rail trails:
- Two in the northern or Mountain area: the Plazaola trail and the Bidasoa trail
- Two in the Central Area: the Irati trail and the FC Vasco Navarro trail
- One in the Ribera in southern Navarre: the Tarazonica trail

Tandems can be hired on the Tarazonica Rail Trail. For the other trails, remember to either take your own tandem or hire one from one of the companies that will take it to your point of departure.

All the necessary information is available on the rail trail official website. We are now going to summarise some important details on the accessibility of these routes. As usual, we would recommend confirming this before your visit.

General information on the rail trails in Navarre

Museum of Navarre, in Pamplona

General information on museums in Navarre 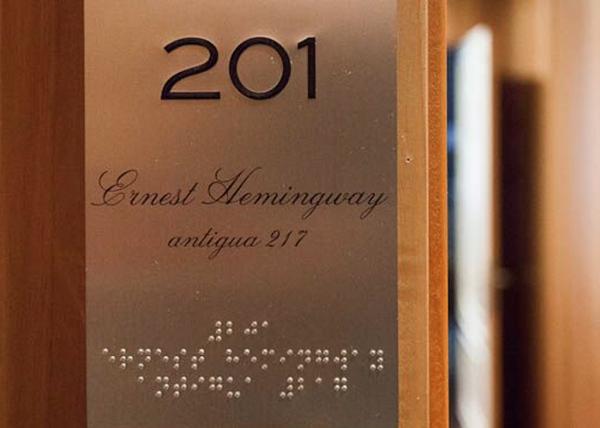 Accommodation in Navarre with visual accessibility

Below, you'll find a list of links to those hotels, country holiday homes and apartments in Navarre that advertise as being accessible to persons with visual impairment on the main tourist platforms.

For each type of accessibility, the platforms apply different filters to give the accessibility details of the accommodation. We would therefore recommend doing the following:

1.    Select the platform that you normally use to make your bookings.
2.    Search the links to find the types of accessibility that you need.
3.    Select the dates for your stay in Navarre.
4.    Choose the establishment that you consider to be the most suitable.
5.    And finally, before making the booking, contact the person in charge to make sure that the accommodation has the characteristics that you require, meets all your functional needs, thereby ensuring a comfortable stay.