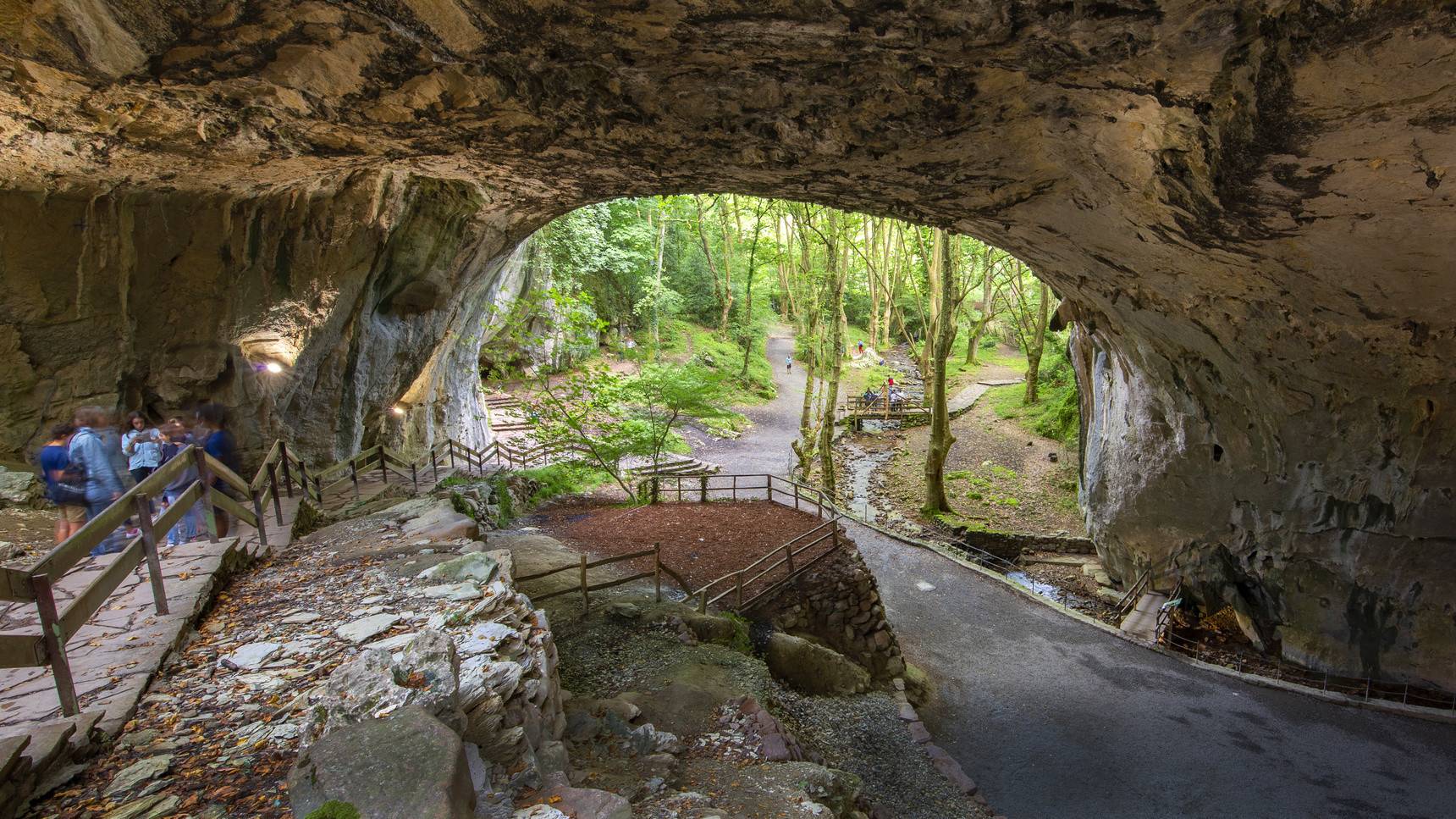 Explore the dark and mysterious depths of Navarre

When we think of forests, we normally think of peaceful walks, family outings or doing sport. But we mustn't forget that they are also the home of legend, mystery and superstition.

Streams that spellbind as they swell to full flow. Gnarled branches that bode ill at sunset. Eerie noises after nightfall. And dark caves where who knows what strange beings dwell…

That shiver down the spine. That feeling halfway between fascination and dread. But it’s thrilling, isn’t it?

Great! Because in Zugarramurdi, there is a fine example of all that. But don’t think it’s one of a kind in Navarre. The caves of Urdax and Mendukilo have nothing to envy it, as you’ll see.

Want to hear about all these places? Then keep on reading, because here you’ll find everything you need to know to plan a trip through Navarre at its most enigmatic.

What have Navarre’s caves got to offer?

Very close to France, to the north of the Baztan Valley, lies the bluey-green landscape of Zugarramurdi, the famous “Village of the Witches”. A landscape of imposing houses, cattle out to graze and a typical Pyrenean street system, overlooked by the Church of la Asunción. It’s a very lively village, with services and attractions well worth a visit in their own right.

But if the village stands out for anything, then that is the popular Cave of Zugarramurdi; the mainstay of legends of akelarres (covens) and witchcraft, not to mention the odd film, such as Álex de la Iglesia's Las Brujas de Zugarramurdi.

Without further ado, let’s take a look at everything awaiting you in the cave. 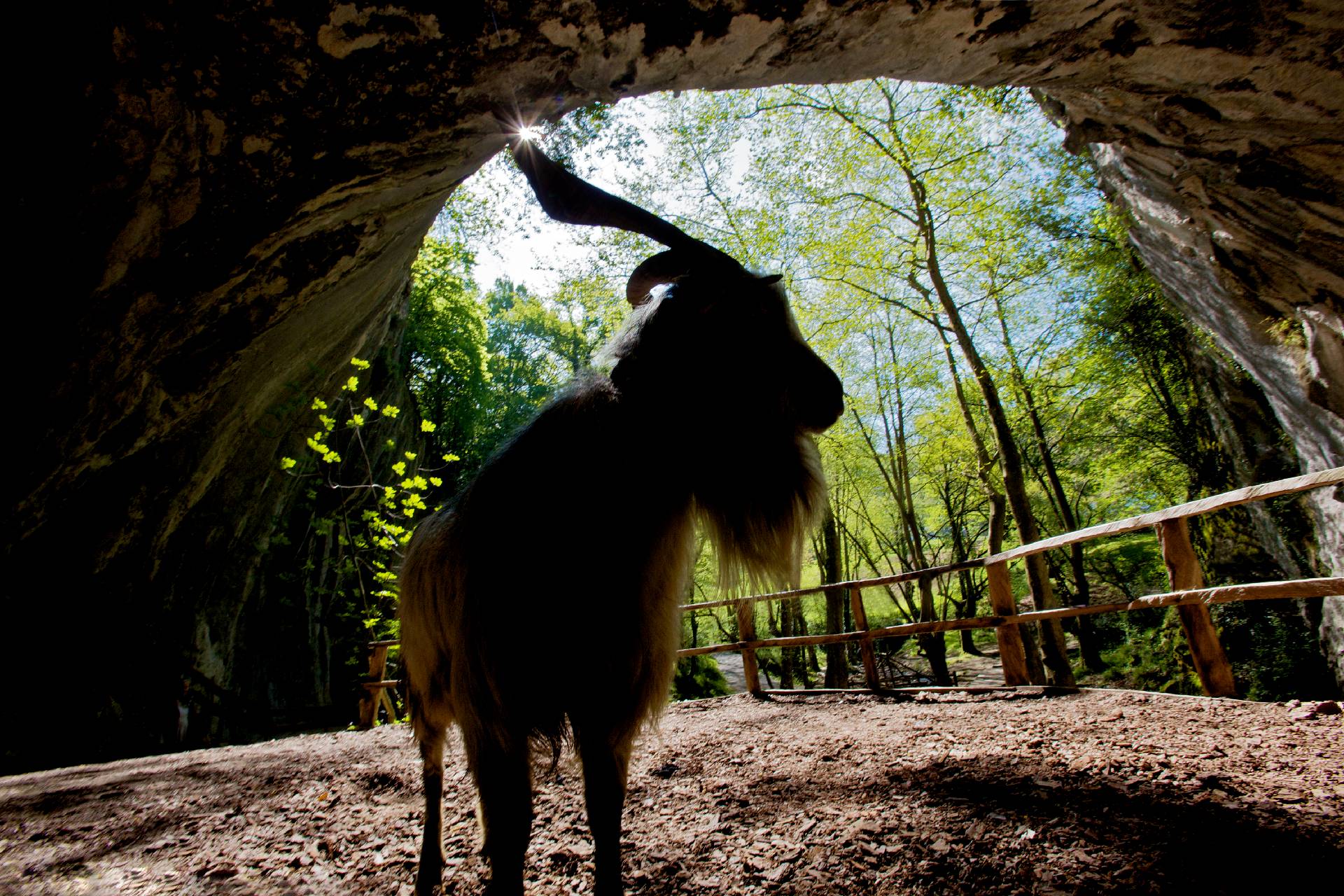 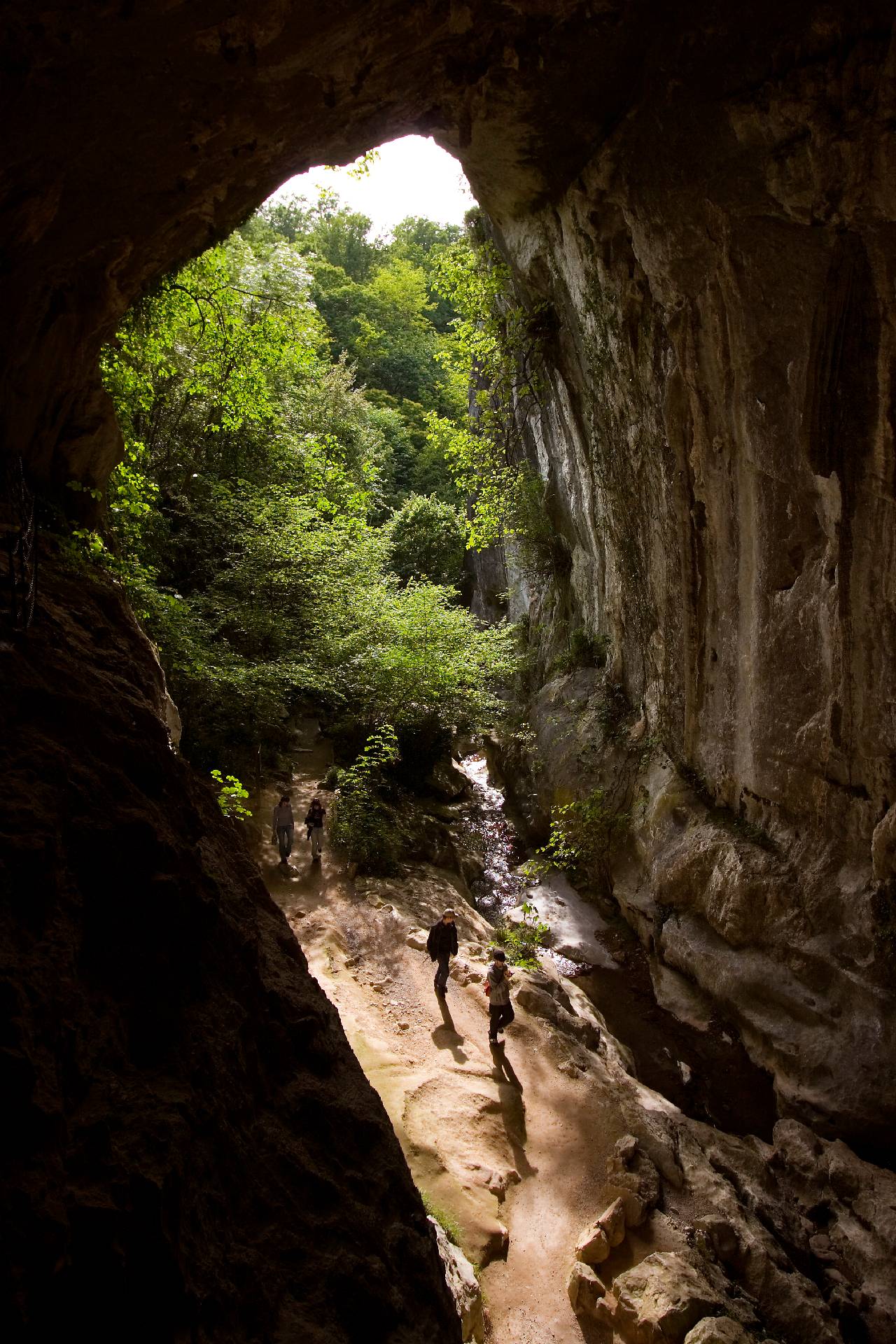 Just 400 metres from the village, a pleasant walk through the woodland surrounding it takes you to the entrance to the cave.

Don’t expect great stalactites and cave paintings; it’s not that kind of cave.

Legend has it that this cave was the stage for akelarres attended by hundreds coming to worship the very devil himself. They needed a lot of room to hold these ceremonies and that's just what this cave has. Large galleries carved over the centuries by the passage of the waters of the Orabidea brook. Incidentally, the Basque name for the brook, Infernuko erreka, refers directly to the provenance of its waters: straight from hell.

The cave’s size is quite impressive: a natural tunnel 120 metres long, reaching heights of up to 12 metres, with two raised galleries. Spacious but far from prying eyes, the perfect place to yield to pagan debauchery in the flamelight.

The myth of Zugarramurdi was consolidated in 1610 when the Tribunal of the Spanish Inquisition in Logroño tried 40 women accused of witchcraft by their neighbours. Of these, 11 were sentenced to be burned at the stake; a panel by the entrance to the cave remembers their names.

All this history makes a visit to the Cave of Zugarramurdi a most enthralling experience; one which you can complement with our next suggestion.

I’m not missing this for anything in the world

Hang on! What would you say to starting your venture into the world of witches at a museum all about them?

Well, you can. If you want to see the Cave of Zugarramurdi your mind fully predisposed to fantasy, we can only recommend you pay a visit to the Witch Museum before you go.

The museum explores the social and cultural origins of legends of witchcraft and the part played by the Inquisition in the tragic fate of its devotees. Characters from local mythology, like Mari and Aker, pagan rites and the role of women as healers will give you a better idea of what the cave meant to those who lived in Zugarramurdi.

You can buy your ticket right now 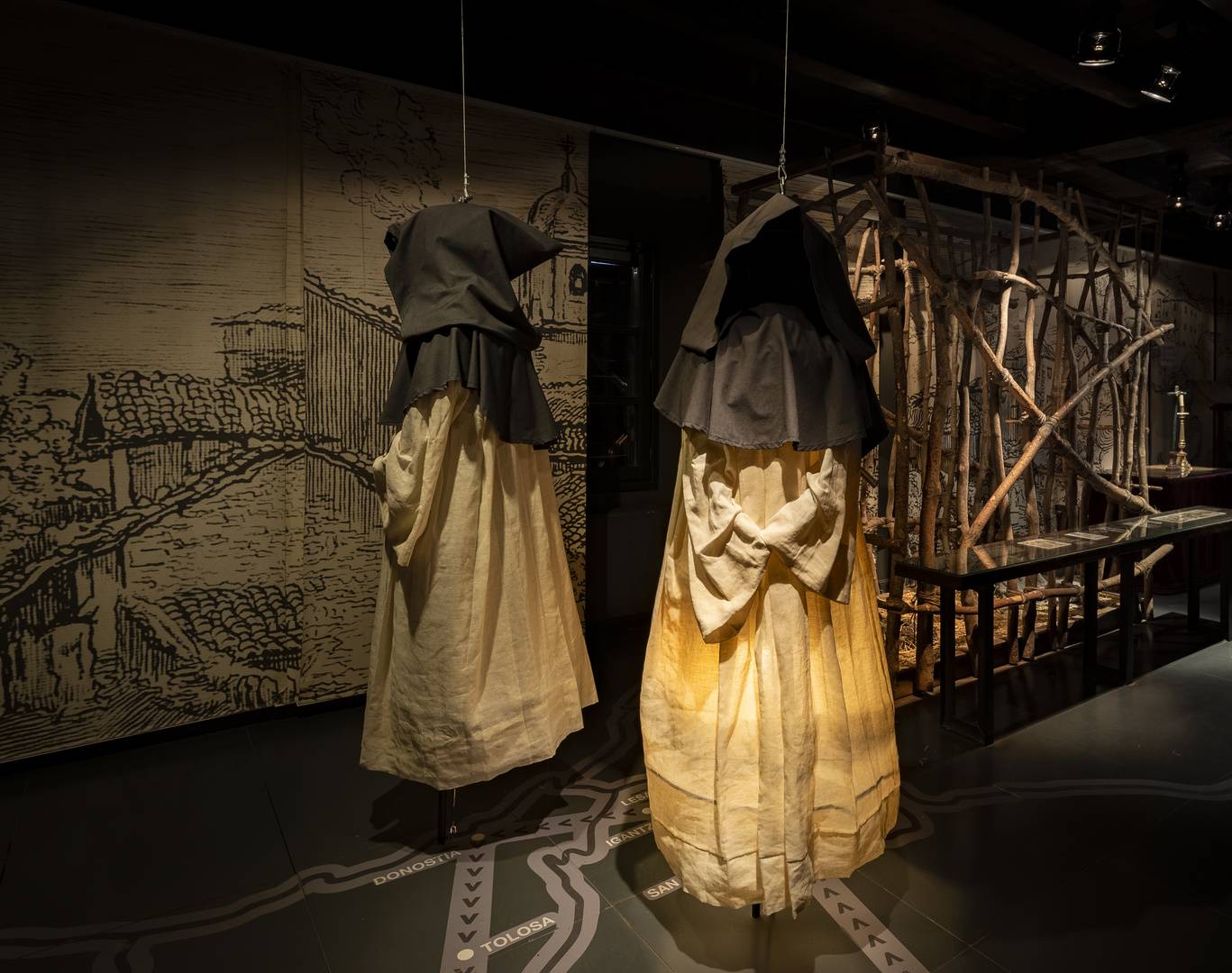 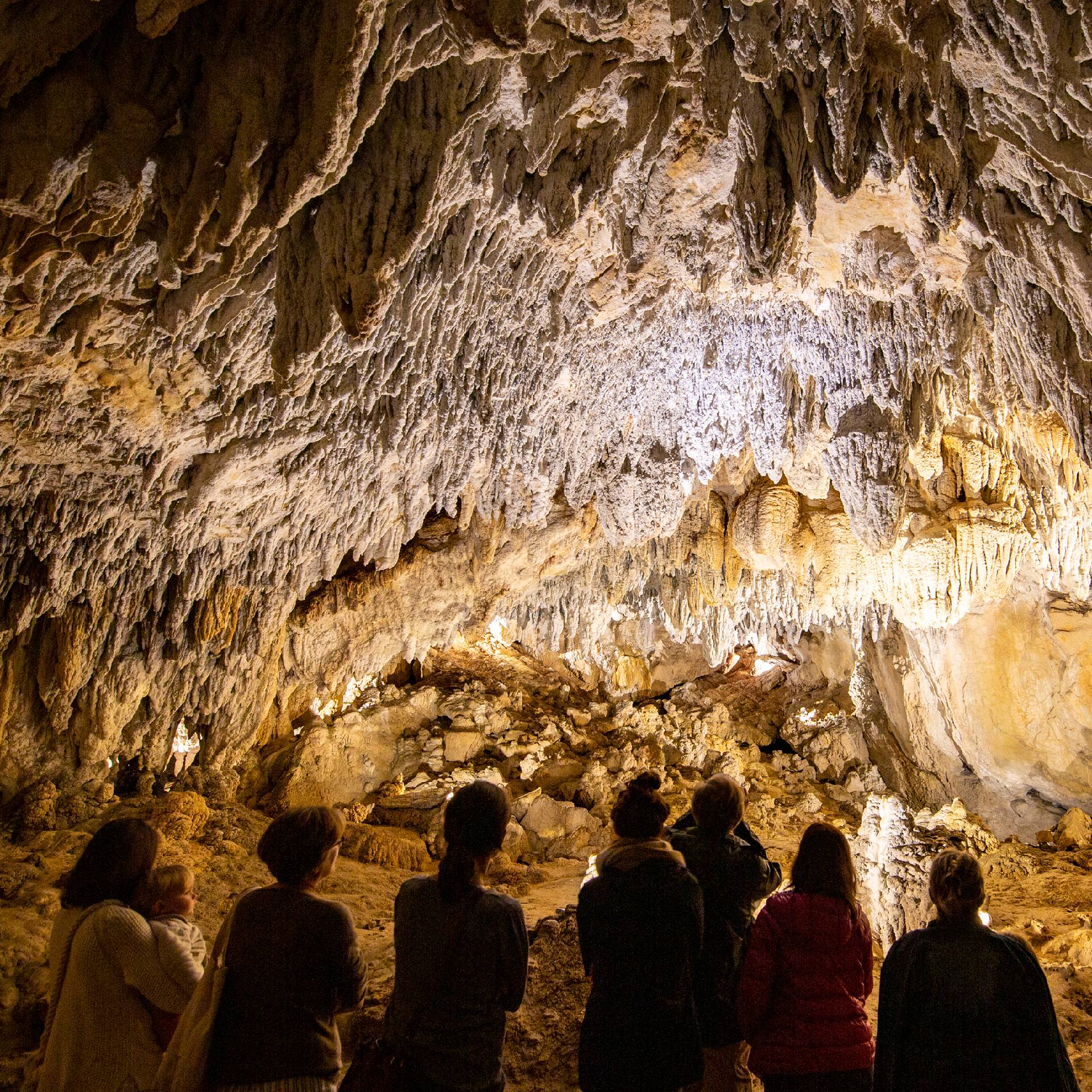 And we’ve got even more good news, especially if you are passionate about caves —and it looks like you are— and walks in the woods.

From the Cave of Zugarramurdi, there is a path, the  path of the Pottoka Azul, which takes you placidly to other no less fascinating caves. We‘re talking about the caves of the small Pyrenean village of Urdazubi/Urdax and the caves of Sara, on the other side of the border with France.

But let’s focus on the caves of Urdazubi/Urdax, which are what brought us here.

The appeal of these caves, and of making the most of your visit to the cave of Zugarramurdi to come and see them, is that they are the very antithesis of the witches’ cave. These caves are hidden away in the rock and here you will find a beautiful display of stalactites and stalagmites formed over thousands of years.

You should know that this cave served as refuge during the War of Independence and the Carlist conflicts, and was a favourite hideout for smugglers and bandits. But it’s not without its aura of mystery, either. Local legends have it that it is still home to the alluring lamias, mythological creatures, half woman, half fish.

The Ikaburu cave, which is what it's actually called, is one of the most important Late Stone Age sites in Navarre. Tours are conducted by specialised guides, who make sure everything remains in perfect condition. And you can also get your strength back at the cafe, have a bite to eat in the picnic area or buy yourself a pretty souvenir from the shop.

Find out everything about the cave

“Bridge and water", that is the translation of the Basque name of this village, which should give you a good idea of what to expect.

And indeed, the village is a picture-postcard Pyrenean village, with its houses built by indianos (those who returned after making their fortunes in the Americas) emblazoned with coats of arms, its surroundings forever green and even a small channel of water running between the houses. In all, it has an undisputable air of solemnity and stateliness; and strolling through its streets is a delight. And not just for their beauty but also for the atmosphere so full of life that they exude.

But wait, there are a couple of other things in Urdazubi/Urdax that you shouldn’t miss:

And now we're heading west, to the Sierra de Aralar, to tell you about the last cave you can visit in Navarre. It's in Astitz and is called the Cave of Mendukilo.

The guided tour will reveal to you the mysteries of the depths of the earth, thanks to the recent installation of floating walkways and multimedia lighting. It passes through several chambers, such as Artzainzulo —the shepherds' shelter—, a large space with plenty of natural light; Laminosin —the chamber of the lakes—, full of geological formations; and the grand finale, Herensugearen gotorlekua —the colossal dragon’s lair. This is where the guide asks for silence and all —all— you can hear is that deep silence which only the earth is capable of producing.

And for the more daring, there’s the chance to sign up for the speleo-adventure programme, which goes as far as the Chamber of the Warrior, 70 metres underground. It is a physically demanding activity that takes about 3 hours and you have to book in advance.

No matter which option you choose, there’s also the reception area, an exhibition area, toilets and snack and coffee vending machines.

But it’s got everything! 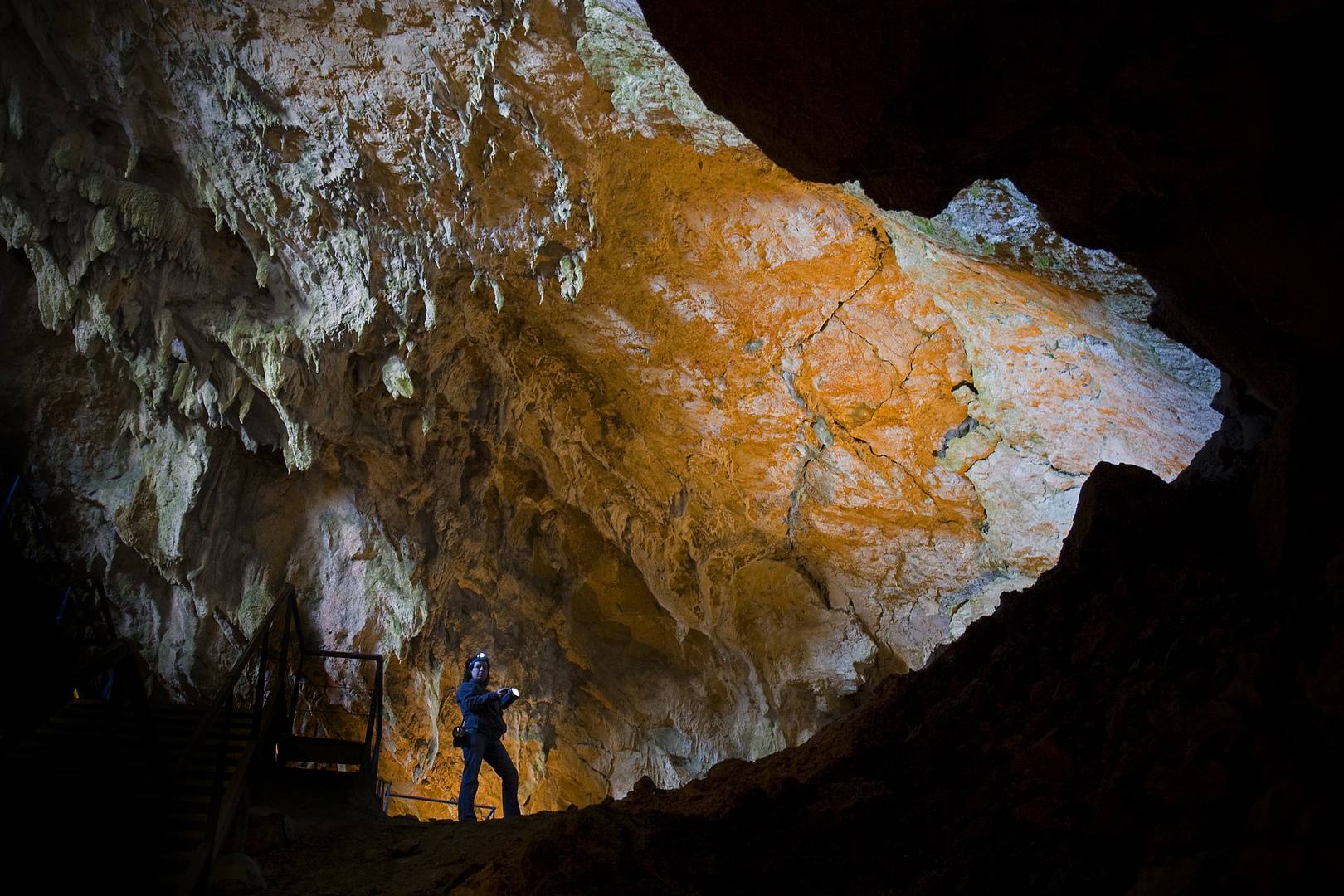 Our caves are much more than just dark cavities. They are folklore, history and delightful villages.

And when you discover them, you’ll say we were right.

What else can I do in Navarre?

Well, loads of different things, so we’d best set them out by season: