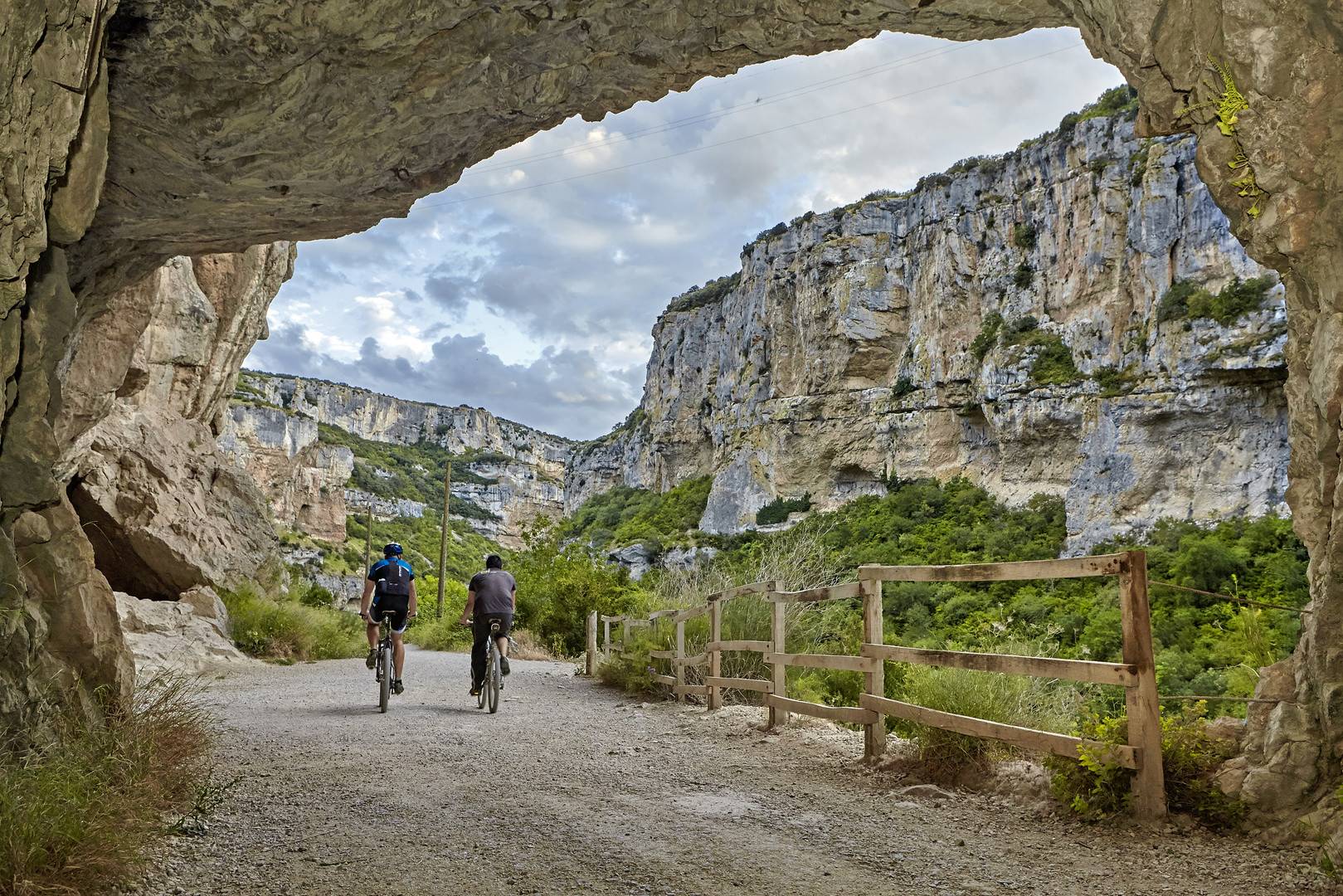 The Gorges of Lumbier and Arbaiun

The largest sanctuaries for birds of prey in Navarre, lying in the foothills of the Pyrenees

In the Pyrenean foothills in eastern Navarre, at some 40 kilometres from Pamplona, there is a place which, although slightly out of the way, receives many visitors.

And, as is often the case in Navarre, the attraction is the scenery. Yet you're not going to find a desert or a leafy beechwood here.

The allure of this area located in the foothills of the Pyrenees in eastern Navarre, are its two gorges, carved by the Irati and Salazar Rivers over millions of years. So, awaiting you here is a land of rugged walls, whose recesses are home to great birds of prey, among others.

Were you expecting this?

Well here it is, another wonder of nature in Navarre.

The beauty of the gorges 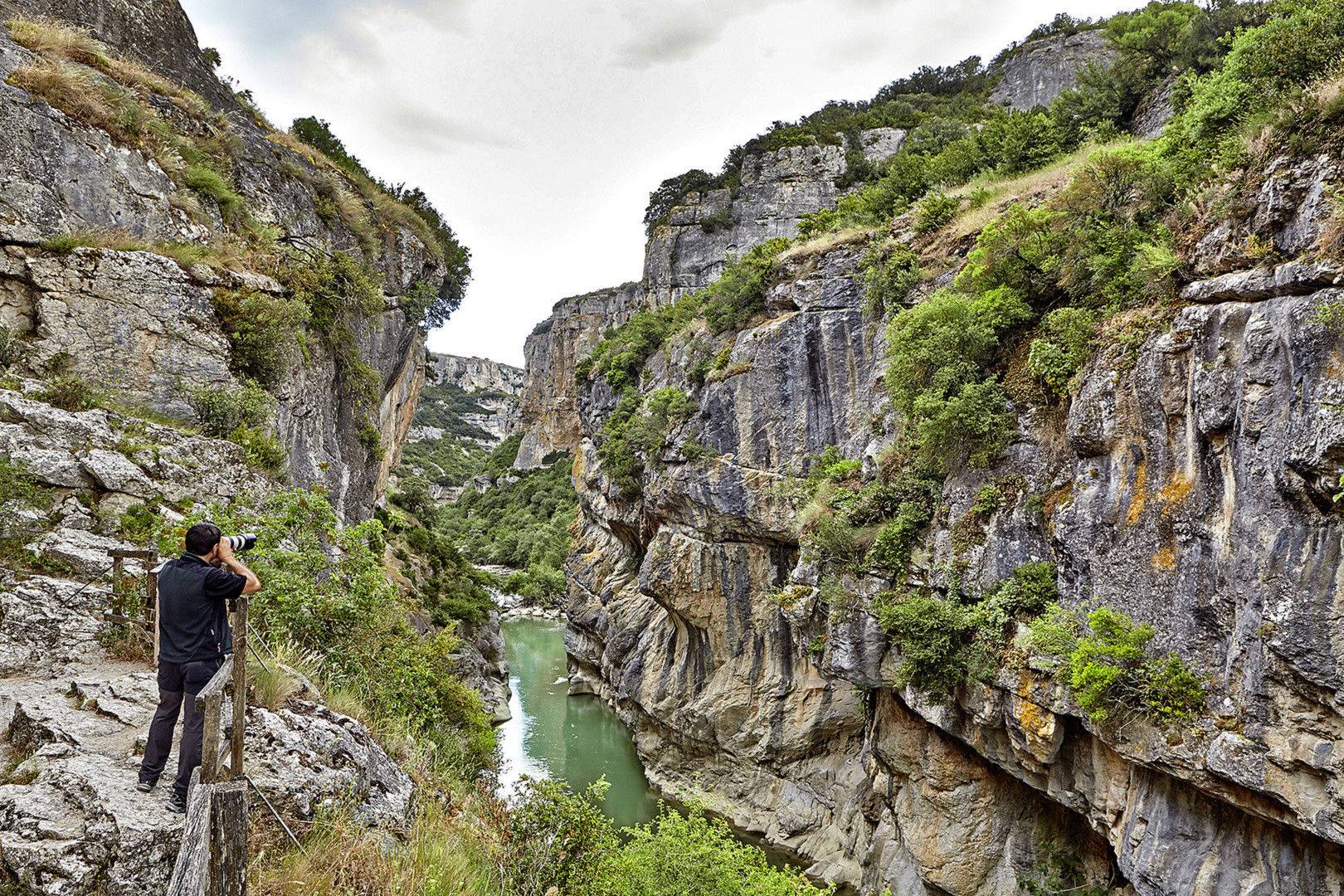 The Gorge of Lumbier

As we've already mentioned, this really striking natural area was carved by the waters of the Irati River. Striking and, it has to be said, with a host of leisure options.

And the first is none other than to get there. Because, if you like winding roads and driving through mountain passes, then you're going to love the route to the Gorge of Lumbier. Particularly if you're coming by motorbike. So, don't be surprised if you come across two-wheel fanatics who take these roads to burn off adrenaline while enjoying some superb scenery.

When you get to the Gorge of Lumbier, you will be greeted by a rugged, green and steep-walled landscape that was declared a Nature Reserve in 1987. But don't let yourself be deceived by appearances, because it's really easy to explore and we'll tell you all about it in just a minute.

But before going into details, you may like to know that you can park your vehicle in a car park that is very close to the entrance to the gorge. In the high season, there's a charge to park - but the rates are reasonable. Next to the car park you'll find an information point, a picnic area and public toilets.

After clearing this up, let's get started.

And if you feel like taking a tour that goes more into the scenic side of the trail, then stop by the Interpretation Centre to get information on the activities offered by the companies in the area:

I want a guided tour

Another option for exploring the Gorge of Lumbier is, in this case, “to get in”. That is, getting in the water!

If you're there during the hot season and you feel like taking a dip, you can do so at a few places along the path going through the gorge. All the same, remember that this is a Pyrenean river and the water will be pretty cold, so don't crazily jump in.

Or you might prefer to feel the excitement of skimming the waters of the Irati River and exploring the area from another point of view. Well, that's easy to do. In an inflatable raft, for example. The perfect activity for friends or family.

Get more information on this rafting experience 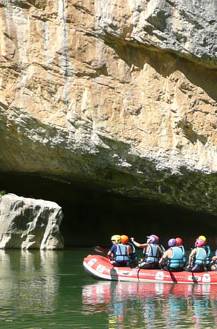 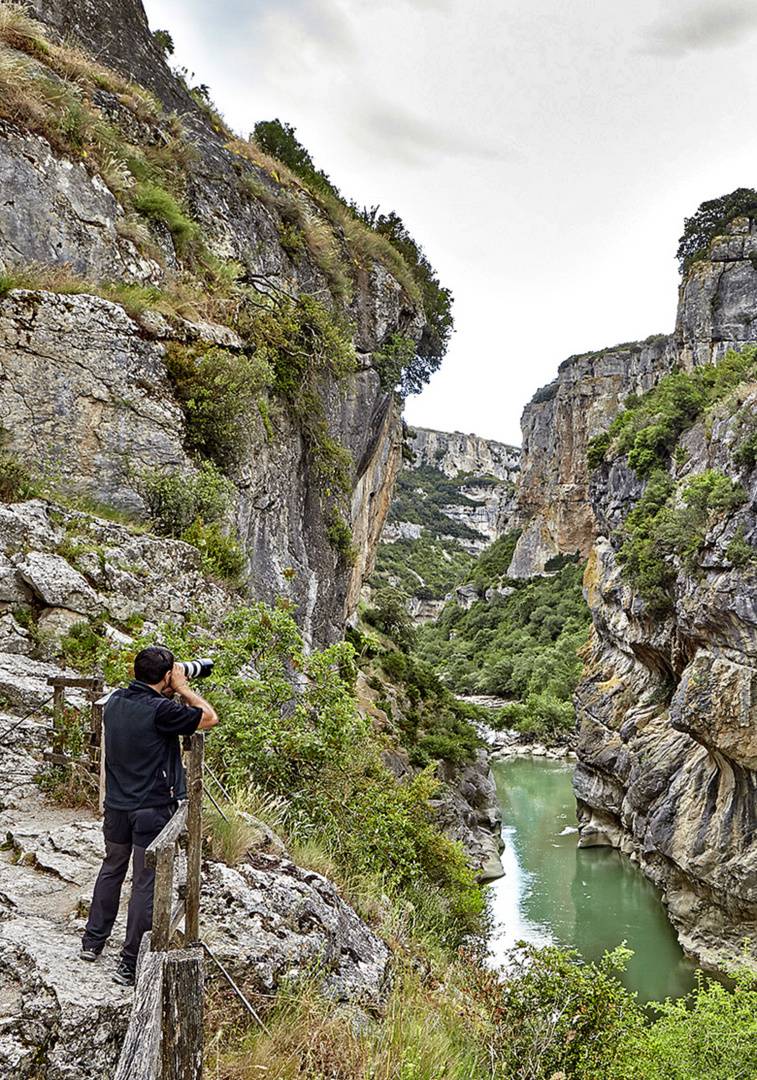 We've been gradually letting it drop and yes, we are now going to confirm it: the Gorge of Lumbier is a paradise for large birds of prey and for everyone who enjoys seeing them in their natural habitat.

In fact, the rough crags are the ideal refuge for these raptors and that's why they thrive here.

Alpine swifts, peregrine falcons, bearded vultures, golden eagles, eagle owls and, of course, griffon vultures. The latter are the most representative birds of the gorges, with something more than 200 established pairs.

And, best of all, to enjoy the spectacle, all you have to do is to look upwards and observe their flight as you explore the gorge.

The Gorge of Arbaiun – Iso Viewpoint

Yes, there's life beyond Lumbier. Lots of life, in fact, because the Gorge of Arbaiun is the most extensive and impressive gorge in Navarre.

It's just a 20 minute drive from Lumbier. Just take the NA-178 road in the direction of Ochagavía and you'll be able to see for yourself that we're not exaggerating at all.

This gorge, carved by the waters of the Salazar River, is not so accessible as its neighbour in Lumbier. That's why we would recommend enjoying it from the Iso Viewpoint, which allows you to appreciate the sheer scale of the gorge. The viewpoint is a concrete platform which overlooks a precipice. Information panels are available and there's a free car park.

The almost 6 kilometres of walls reaching heights of up to 400 metres has led the Gorge of Arbaiun to be declared a Nature Reserve and a Special Protection Area for Birds.

One more thing. It's our duty to insist that you come with your camera. The beauty of the flora and the spectacular colony of vultures are not easy to find elsewhere, and you're sure to want to instagram them. Don't forget to put the #visitnavarra hashtag to re-post on our social media! And all the more so if you're coming in autumn, when this wonder of nature is doubled. 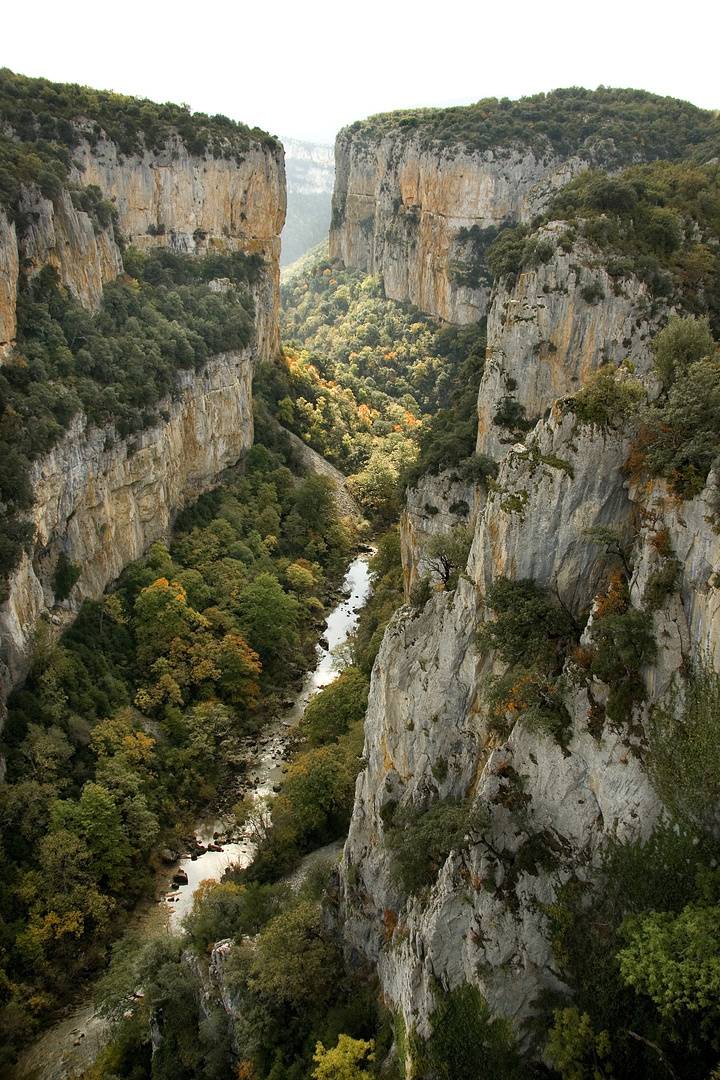 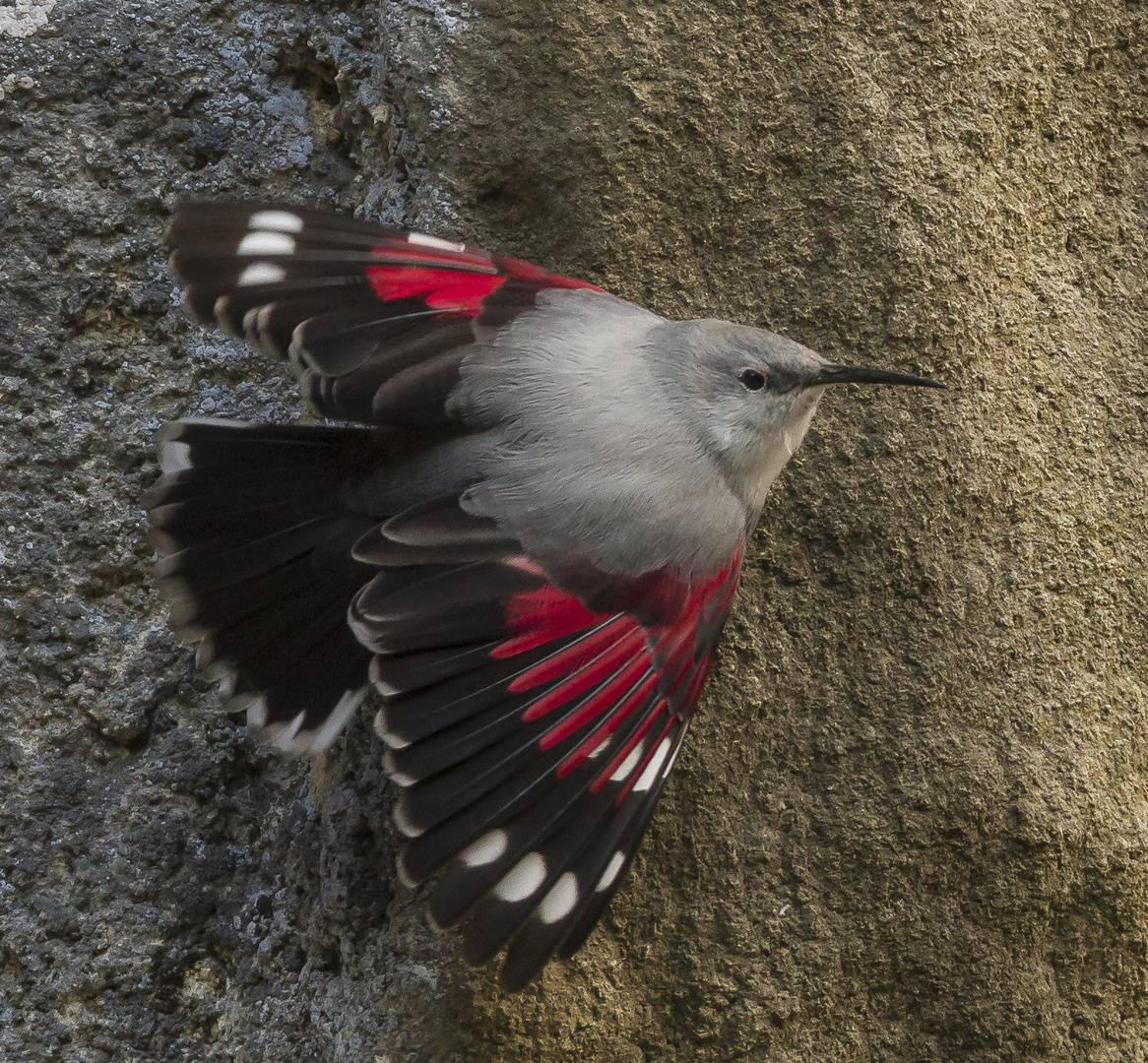 As a final remark on the Gorges of Lumbier and Arbaiun, we would suggest stopping by the Gorge Interpretation Centre located in the town of Lumbier.

There, you'll find all kinds of information on life in the Valley of Lumbier — about its people, professions and traditions - through information panels, audiovisual projections and bibliographical material. Tourist information on the area is also available, so that you can extend your stay for as long as you like.

Check out the activities at the Centre 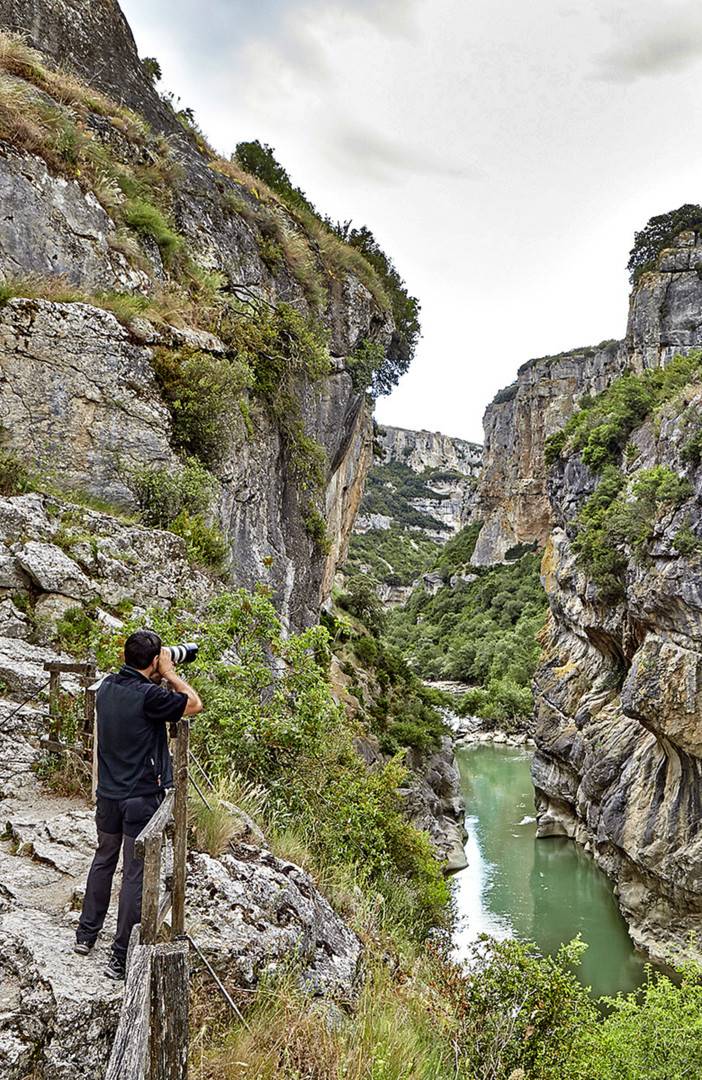 Visit the area surrounding the Gorge of Lumbier

And while we're talking about extending your stay, we've got a few suggestions for you: We're going to give you a few ideas about places that are relatively close to the Gorge of Lumbier, set to add the finishing touch to your break.

I've done that... But what if I want to do other things as well?

Well, if you want to extend your stay, don't worry, there're loads of things to do.